Two people warned us about the difficulty of today’s stage and how there is no way anybody can make it in the 6.5 hours the trailhead sign suggests. I was little bit worried that we will end up scrambling the way we did yesterday afternoon for the entire day today. I enjoyed it, don’t take me wrong, but my legs could feel it and I was not quite sure if dealing with similar terrain for 8 miles or so would still be as much fun and so when the trail started in a rocky path and it seemed to continue that way all the way up the first hill, I was happy. Rocky trail I could do. The longer it lasted, the least amount of scrambling we would have to do. 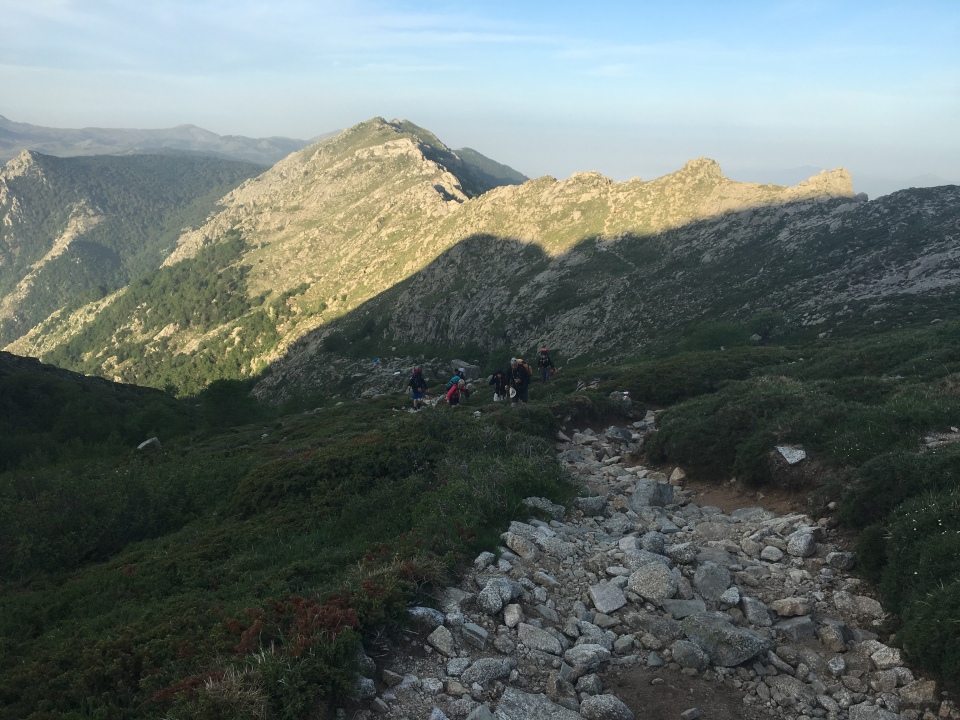 Climbing out of Refuge D’Usciolu

In the end there were only two spots where we scrambled and the difficulty of those sections was much lower than what we experienced yesterday. The trail remained rocky for most of the way though and we had to rock hop one boulder field so we weren’t breaking any time records. Still we made it sooner than the estimated time the sign gave us.

The hike was spectacular. We walked above a sea of clouds, sometimes on the top of the ridge, sometimes the route dropped to skirt over a rocky feature and then climbed up again to another view point. On one side there were sea views, somewhere below the clouds, we did not see the sea at any point today, and to our left, the ridge dropped to a valley with villages scattered around, the red roofs stood out from the verdant forest by which they were surrounded.

We enjoyed 40-minute break at Refuge De Prati, bought some pop, because just like always after few days on trail, that’s what my body craves, and an orange. We talked to several people whom we met at the Refuge yesterday, one of them was a very nice Belgian couple who shared peanuts with us. Everybody seemed to be in favor of staying here. I could not blame them, the views were hard to beat, and the host, though he did not speak English, seemed very friendly. But it was too early and our plan was to hike to the next Refuge two hours away to make tomorrow more manageable.

And so we started hiking again, short uphill and then a long down on a path from hell. I have not seen more rocks scattered in such a haphazard way on a trail in my life, always just in the spot I wanted to place my foot at. Their sizes varied too, from taller ones than we had to put an effort into stepping over or had to jump off, to small pebbles that made us slip and slide. Still it was a beautiful walk, alpine scenery at first and than we walked into a forest where, for maybe half a mile the trail got easier. 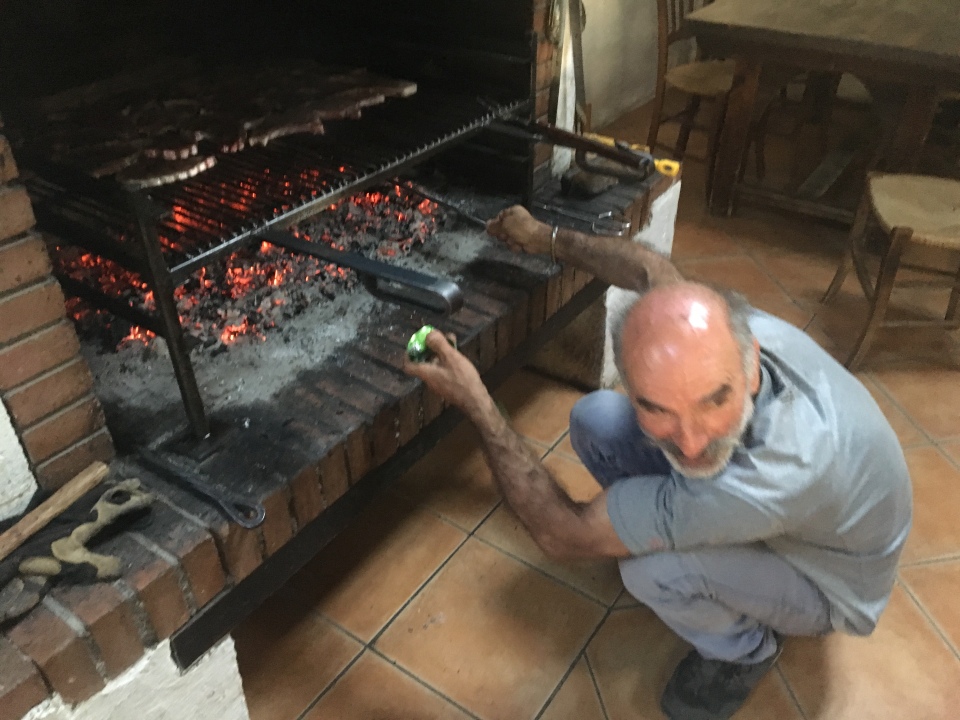 Eventually we joined a dirt road, also in quite a desperate state of being, any dirt road back home is heaven to drive on in comparison, I would never expect a vehicle attempting to hop over the boulders or navigate the deep ruts. Yet there was a truck heading up and the guy seemed to have best of the time pushing his vehicle to limits.

“You know Dozie could do that,” Dave said referring to our Jeep. “If driven by somebody who knew what THEY were doing.”

Luckily neither of us knows what we’re doing in such terrain, because there is absolutely no way I’d put my truck through a terror of his road was.

And of course we had some wine with dinner.

Refuge Di Verde surprised us with a treat of hot shower, unlimited water, which was included in our €8.00 per person camping fee. It felt so good to feel my hair again, instead of the sunscreen drenched clumps they became during last few days, and the most wonderful dinner menu.

Notes: Refuge De Prati had a decent selection of snacks, including apples and oranges. Host did not speak much English but somewhere between the few words he understood and the few words we knew in French, we managed to order everything we needed.

Refuge Di Verdi is located in a beautiful forest scenery and has a very relaxed feel. Camping sites are very nice and there is plenty of shade unlike the other refuges we saw so far. Plenty of space to sit inside the restaurant as well, or outside on the terrace.

Dinner is €19.00 and it was a four course meal starting with a salad, then we had a mail dish of fire roasted pork and zucchini, followed by a course of bread and cheese and last came chocolate mousse. It truly was a feast well worth the price. We also purchased liter of wine for €12.00 (half liter was €8.50)

There was a really nice, quite protected spot between the two refuges where wild camping would have been spectacular if allowed (no water nearby) Unfortunately it’s not so we took few photos of the view and treaded on.