Last year the snow came early. It was Labor Day weekend and we were camping at Peggy’s Pond expecting to attempt summit of Mt. Daniel the next morning. But before the morning had a chance to break, sound of precipitation stirred us from our restful sleep. Rain usually drumms gently on the fly of our tent as it bounces off. I like its rhythm, the lullaby of its pleasant tones. This sound was different. Heavier. Splattering. When morning came we rose to a white blanket of snow and thick milky curtain of low hanging clouds. Our climb was over before it had a chance to start.

This time around sun greets us from afar and the sky is clean, swept of clouds, with the exception of a few light wispy streaks that I know will look awesome in pictures.

The trail to Peggy’s Pond is lined by blueberries, plump and ripe to perfection and we make frequent stops to enjoy this sweet gift of nature. 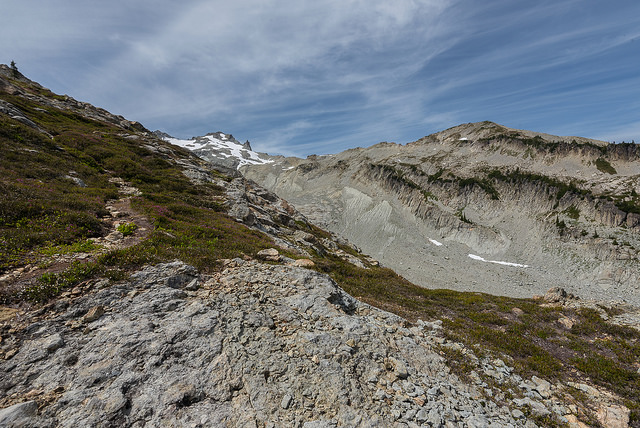 Our progress is further slowed by the terrain. There are no issues on the main trail from Tucquala trailhead but as soon as we walk on the climber’s path headed for Peggy’s Pond, the tread becomes narrower and less stable and just as last year we have to bypass a washed out part of the route on a small rocky ledge. Then the path disappears back in a forest and until Peggy’s Pond we can count on more stable ground.

It’s somewhat surprising that we are the the first group here. The parking lot was packed to its limit and beyond and even though we knew that most of the people are headed to more popular destinations such as Tuck & Robin Lakes or Jade Lake, we expected to bump into some climbers here as well. 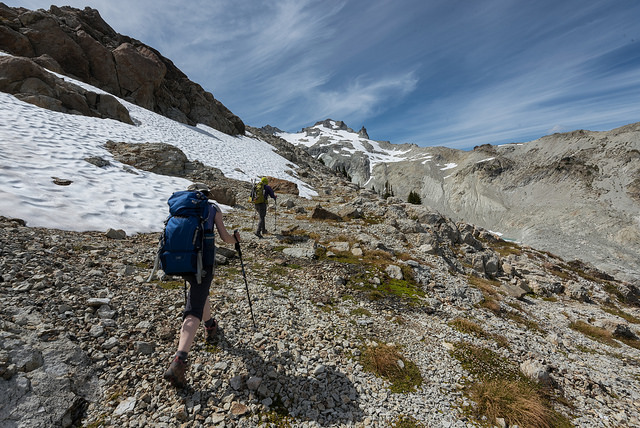 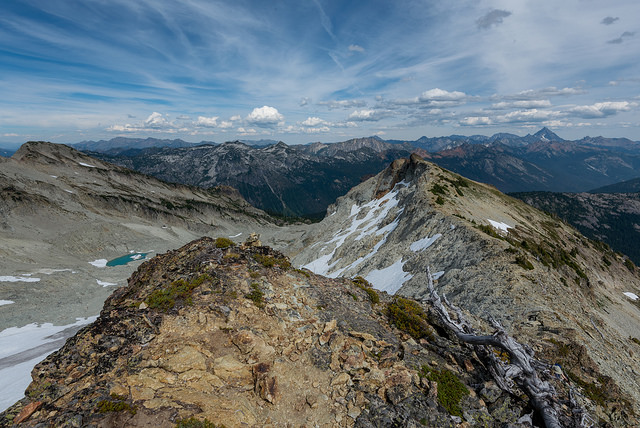 With nobody else around we have the first pick of campsite. We pitch on the far side of the Pond, on a spot that charms us with beautiful view of Cathedral Rock, another significant feature in the area and also a popular climbing destination. Behind us we can see the upper part of Mt. Daniel, but from this perspective large mass of the mountain is hidden behind a ridge we have to initially ascend. 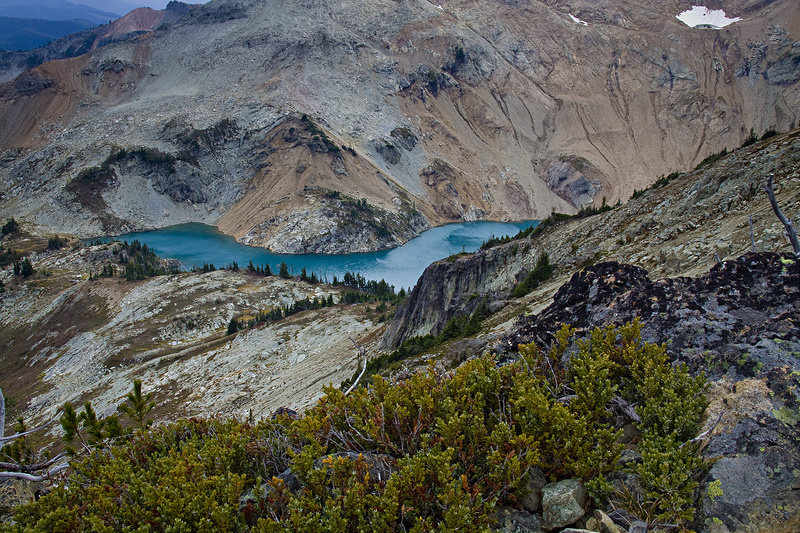 No time gets wasted. We are on our way to the summit shortly after our tents are erected. The path is steep but rather obvious and where the grade flattens for a brief moment we find the first intersection. From our little exploratory hike last year we know both ways lead to the top of the ridge. We choose to follow the lower route just like we did last year; however when we arrive at the next intersection, the route is less obvious and we zig where we should have zagged and soon we realize this is not the easiest way up. The route we are on is marked by cairns so somebody obviously hiked here before us, perhaps it’s an earlier season route, who knows. It takes us the direction we want to go but instead of gaining the ridge and following it’s rather gentle course we side hill and have to deal with scree and several remaining snow tongues. When the next opportunity comes for us to connect to the ridge, we take it, despite the fact cairns still mark the side hill route.

The ridge is an easy walk at first, wide and open with views of Cathedral Rock and Peggy’s Pond. On the other side tall towers of colorful rock rise above Circle Lake.

Later the ridge narrows and several section require an exposed move or two. Exposure has always been my enemy and being jet lagged my defenses are extra low. I cringe at a steep scree slope we have to ascent at the end of the ridge. Slip and slide would not be a pleasant experience here.

The ridge run its course and we have to cross a  jagged high point on a rising ledge. The ledge itself is not super narrow but still the sight of a cliff under us is making my head spin. I try to go further with with every additional step, I get dizzier, until I realize that today is simply not the day I can handle exposed class 3 terrain.

The summit of Mt. Daniel remains untouched and that’s OK. This time it was about the journey, next time hopefully we reach the destination.

One thought on “Mt. Daniel Attempt”