Our last day on Loowit Trail was short but the most adventurous of them all. We left camp early treading the well established path towards Ape Canyon in the cool air of the wee hour. The first gully we had to cross today gaped wide but it was shallow and the path was never lost through the dip like it happened so many times yesterday. 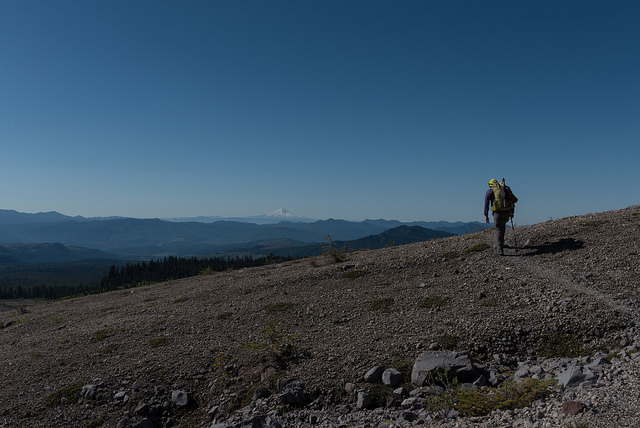 Heading out towards Ape Canyon Trail

I hoped this would be the pattern for all gullies we encountered today but even then I knew it was an unlikely scenario.

The first major drainage we had to cross took us somewhat by surprised. We enjoyed the view into Ape Canyon and a walk through thinly forested slopes where under the heat of the rising sun the air was filled with the scent of dry summer dirt. I was hopeful to find more strawberries here but none were ripe yet on this side of the mountain. Soon after we walked out of the trees my attention was taken by the enormity of the mountain looming above us. I savored the view until the trail abruptly ended and below us was a gap several hundred feet deep with a drop of so steep that if we slid, the chances were slim we could stop ourselves before reaching the bottom. The path leading down, if it could even be called a path, was soft, loose dirt that crumbled under our feet and our hands searched in vain for handhold of any kind. Those who are used to scrambling in exposed class 3 terrain would have less difficulty here but for me the descend was a nerve wracking experience, one way above my comfort level.

Views to the South

Descend to Muddy River drainage was even sketchier. The path was of similar quality and the slope, which was just as steep ended in a sheer cliff. Here slip would be deadly. Our hands found even less support here and the very few places where a rock would stick from the dirt could not be trusted. The hillside was unstable and large boulder could easily be dislodged if one seeked them for hand hold.

Going up is usually easier in technical terrain but not in Muddy River wash. The path out of the drainage was not carved well and it was increasing more difficult to find a purchase. The last 20 – 30 feet where the path was partially filled with dirt were the worst.

The trail was much sketchier than it looks

I was rather happy when solid dirt returned. The trail was pleasant. We walked through meadows with extensive views and a large boulder field and then we walked back into the trees and remained in their shade for the rest of the way back to June Lake junction.

Back on a pleasant tread enjoying views