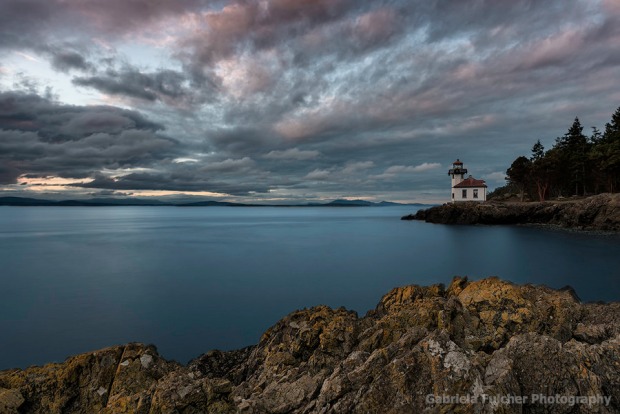 Situated in the Northwest corner of the United States San Juan Island is a breathtaking gem of deep forests surrounded by shining sea. The time seems to go slower here as you stroll through purple field of lavender or browse the shoreline where pods of resident Orca Whales can often be seen during summer month.

On the western side of the island Lime Kiln Lighthouse guards the shore. The lighthouse borrows its name from the lime kilns that were built in the area in the 1860s. For roughly sixty years, the area surrounding the kilns was quarried for limestone, and a large portion of the island was logged to feed the fires that transformed the limestone into lime, which was then used in mortar. Remains of the kilns can still be seen today, just north of the lighthouse.

The Lighthouse Board first recommended construction of the lighthouse in 1908, noting that all commerce between Puget Sound and Alaska and between Cape Flattery and points in the Gulf of Georgia would be benefiting from the establishment of a light and fog signal at this important point.

Consisting of a thirty-eight-foot octagonal tower rising from a concrete building, Lime Kiln Lighthouse was the last major light established in Washington. Construction started in August 1918, and the light from the tower’s Fresnel lens was first exhibited on June 30, 1919. Two dwellings were also built of reinforced concrete, containing six rooms, a bath, and a basement, and these dwellings were provided for the keepers.

Lime Kiln was the last lighthouse in Washington to be electrified, not receiving this modern convenience until well after World War II. When Bonneville Power Administration laid a submarine power cable from Anacortes to the San Juan Islands in 1951, power lines were also extended to Lime Kiln Lighthouse. The Fresnel lens was then replaced by a non-rotating, 375-mm drum lens with an electric light bulb, and two electric foghorns were installed.

Nowadays, the tower flashes once every ten seconds, and the fog signal has been discontinued. The original keeper’s dwellings can be seen in the woods near the lighthouse and are used to house Lime Kiln State Park personnel.

In 1985, the lighthouse and the sea that surrounds it were dedicated as a whale sanctuary and research station for marine mammal scientists. Scientists based in the lighthouse track the movements and behavior of the orca whales which reside in the area. Webcams and a hydrophone are located at the lighthouse to facilitate remote tracking of the whales.

One thought on “Lime Kiln Lighthouse”