During the night the wind visited us frequently, leaning into the tent, testing the structural soundness of the shelter. Morning then dawned surprisingly calm, except for occasional and rather unexpected gusts, one of which lifted our tent and was I a second slower diving for it, we would have seen it flying over a cliff back down into the valley where we came from yesterday. I managed to grab the very end of the fly that was luckily still attached to the body by one clip and the day was saved. 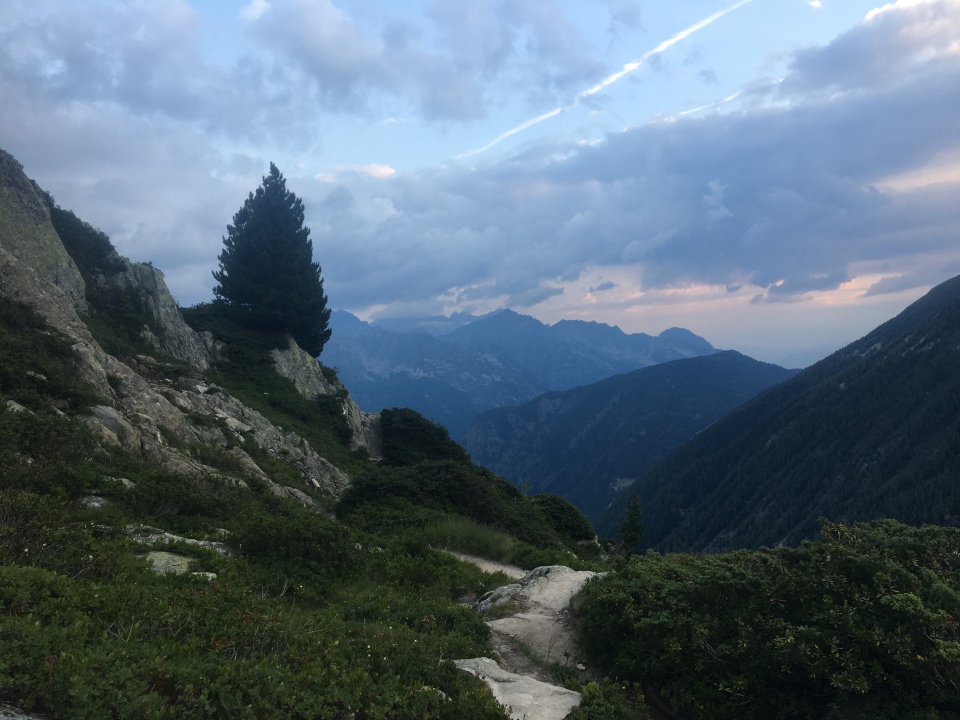 Such a beautiful morning to wake up to

Our morning walk involved a rising traverse towards Refuge Col de Balme through green slopes filled with blueberry bushes and short evergreens and later on the sparsely forested hills gave way to meadows and flowers of great variety, and mountains with their rugged peaks and hanging glaciers loomed above us from any angle. How many people have glanced at the beauty of this landscape I wondered and lost in that thought I neglected to pay attention to the trail for a second… and next thing I knew I was on the ground and my left shin throbbed in pain. Stupidly I stepped too close to the edge of the narrow path and the dirt gave in, sending me to the ground where a rock waited for my shin to land on.

Cannot complain about these views.

I scaled the damage. Scrape that would possibly bruise later. I looked quite bad but the pain dissipated as soon as I shifted my leg and my shin lost contact with the rock it was previously pressed against. I could walk quite normally and less than five minutes after the accident we continued on.

After Refuge Col de Balme, place with quite a pretty view by the way, though in my opinion Les Grands holds slightly better views, anyway from there the trail started to drop through pastures. Just as we made our way through a herd of sheep, the rain drops started falling on us from the one and only dark cloud above our heads. The rain shower was brief and light, and considering the forecast, we got out lucky. 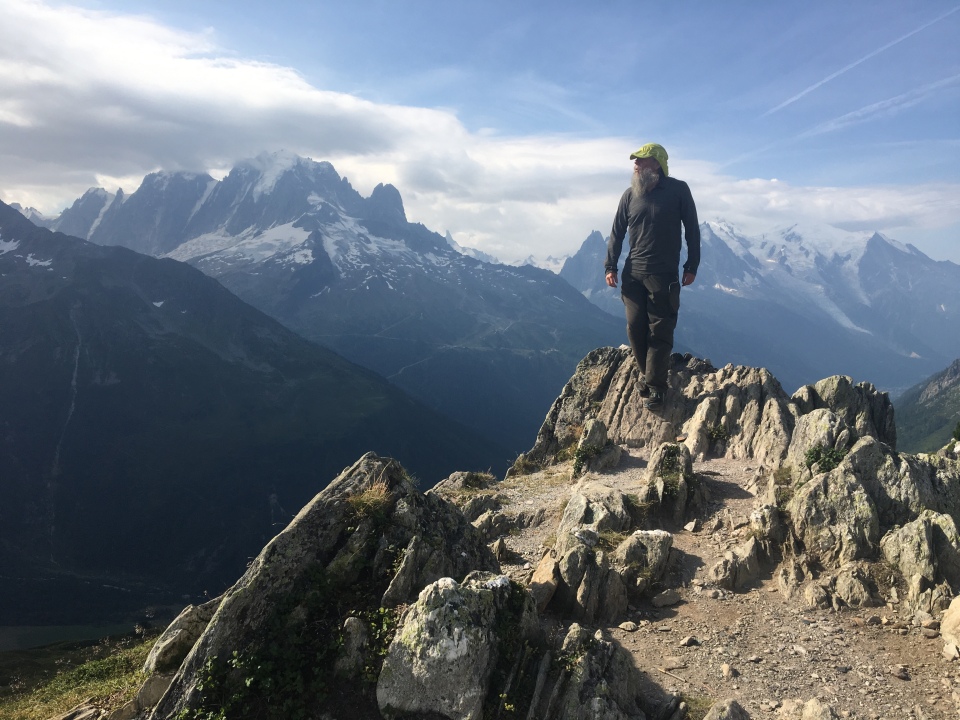 Dave is soaking up the ridge line views

The next climb followed a ridge. The path was rocky, I had hard time prioritizing between watching my steps and enjoying the views. Compulsory break happened at the high point, we had a snack and took gazillion of pictures.

Descent to Tré-Le-Champ seemed never-ending. The trail improved once we dropped bellow the tree line and we could maintain faster pace but even then we switchbacked and switchbacked more and just kept dropping. It was heartbreaking to loose all the elevation we worked through sweat and pain to gain. 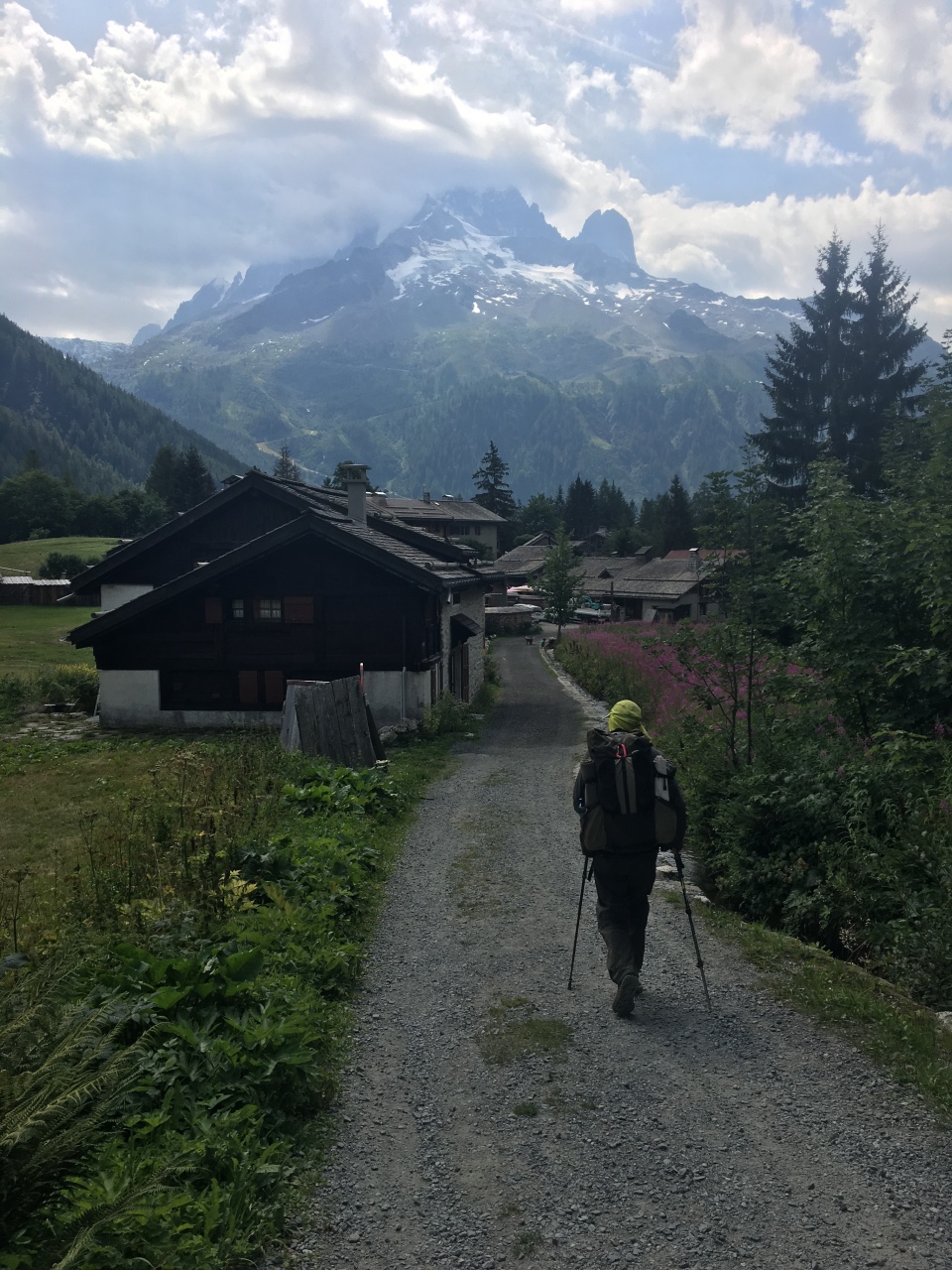 At the very bottom we visited Auberge La Boerne where we had a lunch. Fabulously delicious food that won’t break the bank. Highly recommend.

Full of energy we set out for the final climb of the day. The trail led through forest first where we were shaded from the warm touch of the sun that peaked from the clouds more often now than in the morning. Higher up when we left the trees behind, the wind picked up to cool us off. The hiking conditions were perfect.

We skidded along area that’s popular with climbers. We saw many of them scaling routes on the wall. And the trail had some climbing in store for us as well.

The ladders were not nearly as scary as the photos I saw online. Perspective often plays tricks, one can never judge steepness or difficulty of terrain from a photograph alone. My feelings could have been different if we had to descend the ladders but climbing up the sturdy metal steps with a very good rod as additional aid, there was not much pucker factor for me here. (As a side note I’d like to mention our experience would have been different should the rain come as predicted. This was not a section I would recommend on a rainy day).

Our next stop, Aiguillette d’Argentière (1,893 m), was where we had to decide whether we would stick with the regular TMB or visit Lac Blanc, an alternate route that climbs more but offers views of some pretty spectacular lakes. We took the alternate, hoping to camp by one of the lakes.

The trail was steep and there was one last short ladder to climb. The lakes were totally worth it though. 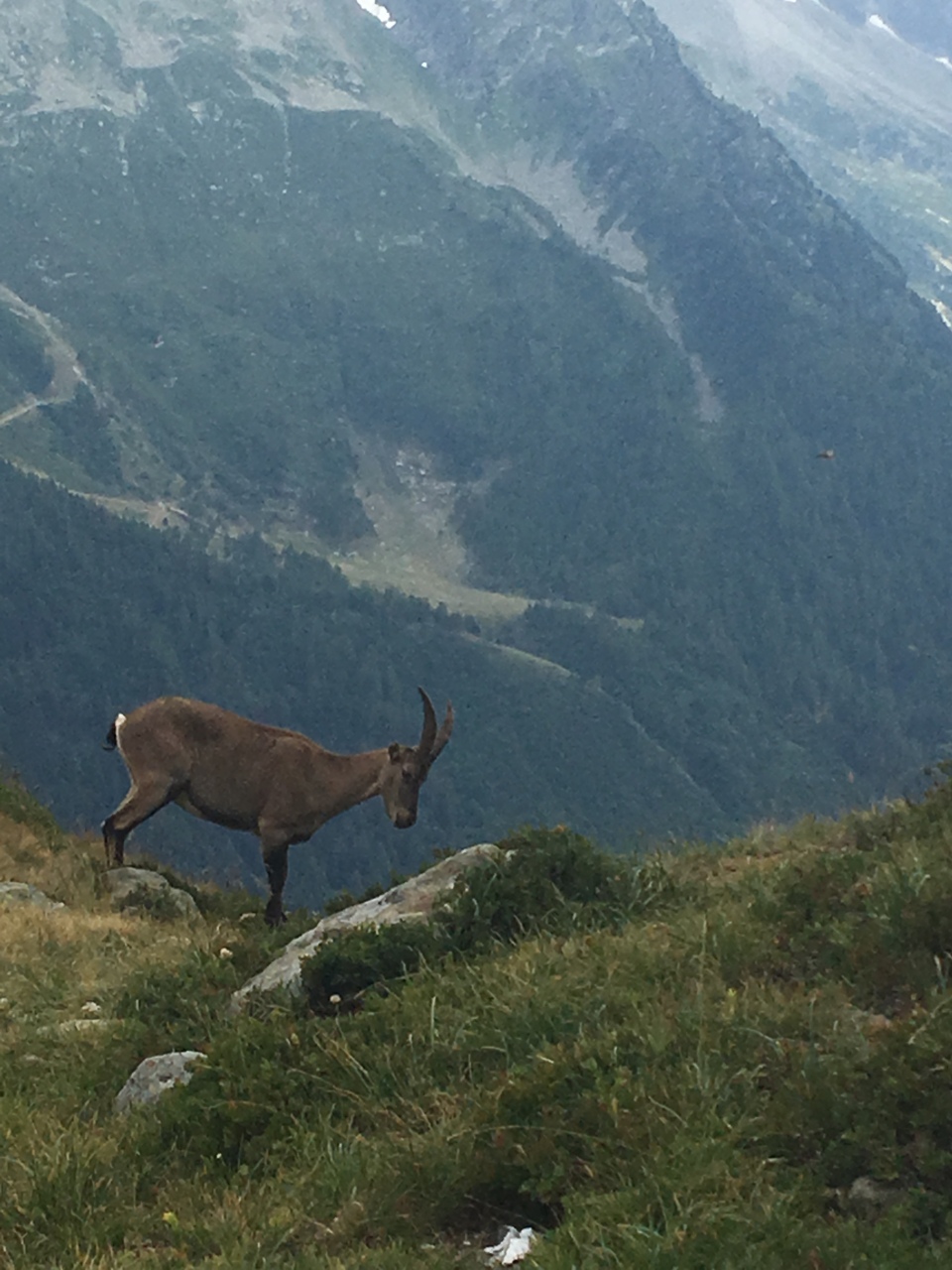 Camping is not allowed at Lac Blanc. The warden suggested several spots nearby but warned us a big storm was coming. We made a decision to pay for bunk beds in the dormitory. It proved to be a good choice. The sky opened shortly after dinner, lighting, thundering and all the beauty a storm brings that we could watch from the comfort of a bed, and when the time came, we put ear plugs in and happily drifted to sleep.

The day as we planned it was rather long and involved decent amount of uphill. Strategically not the best choice but it allowed us to spend night at Lac Blanc which is worth it.

There is no camping allowed at Lac Blanc. Nearest camps are about 30 – 35 minutes each direction. If you hope to spend night at the Refuge at Lac Blanc, I recommend calling ahead and booking a bed. The place is popular and fills most nights. We got extremely lucky, a group of four did not show up because of adverse weather forecast.

Accommodation was €55.00 per person. Dinner and breakfast was included in that price.

There is no free potable water available at Refuge Lac Blanc . Bring filter or tablets to treat the lake water or the tap water (which comes from the lake). Bottled water is available for purchase.

If you’d prefer shorter day, staying at Auberge La Boerne is a possibility. They allow for tents to be pitched on their property as well.