It rained last night. It started about three thirty in the morning and the drops bouncing off the fly of our tent made a thundering sound. I even thought I saw lightning but then I realized it was flashes from headlamps as people crawled out of their tent to hide their backpacks and other possessions from the rain. By the time we got up at 5:00, the rain was gone and everything was dry.

Hiking out of Petra Piana was very scenic. The trail got us high above the refuge in a very short period of time (yes it was quite steep) and then the trail kept gaining elevation on a rocky trail that we shared with multiple small streams for another hour or so. The views were spectacular.

Today required very little scrambling. The trail was rocky and slow going but only few times we had to actually use our hands to aid an ascend or a descent.

“There are couple sketchy sections,” told us s guy coming from the opposite direction. “The rest is easy.”

There were chains guiding one section of steeper rock. There was also a short traverse of a rocky section that happened on a narrower ledge with one or two exposed steps. And there was a boulder field to cross. None of which I found scary, at least not going our direction. Going the opposite way, the section with chains could have been trickier as the rock was quite smooth. But we climbed it up and there was not much to it. We received all the absolutely breathtaking views, and there were breathtaking views of the most beautiful alpine scenery with lakes and granite peaks surrounding us the entire day, for very little mental challenge. It felt nearly like cheating. 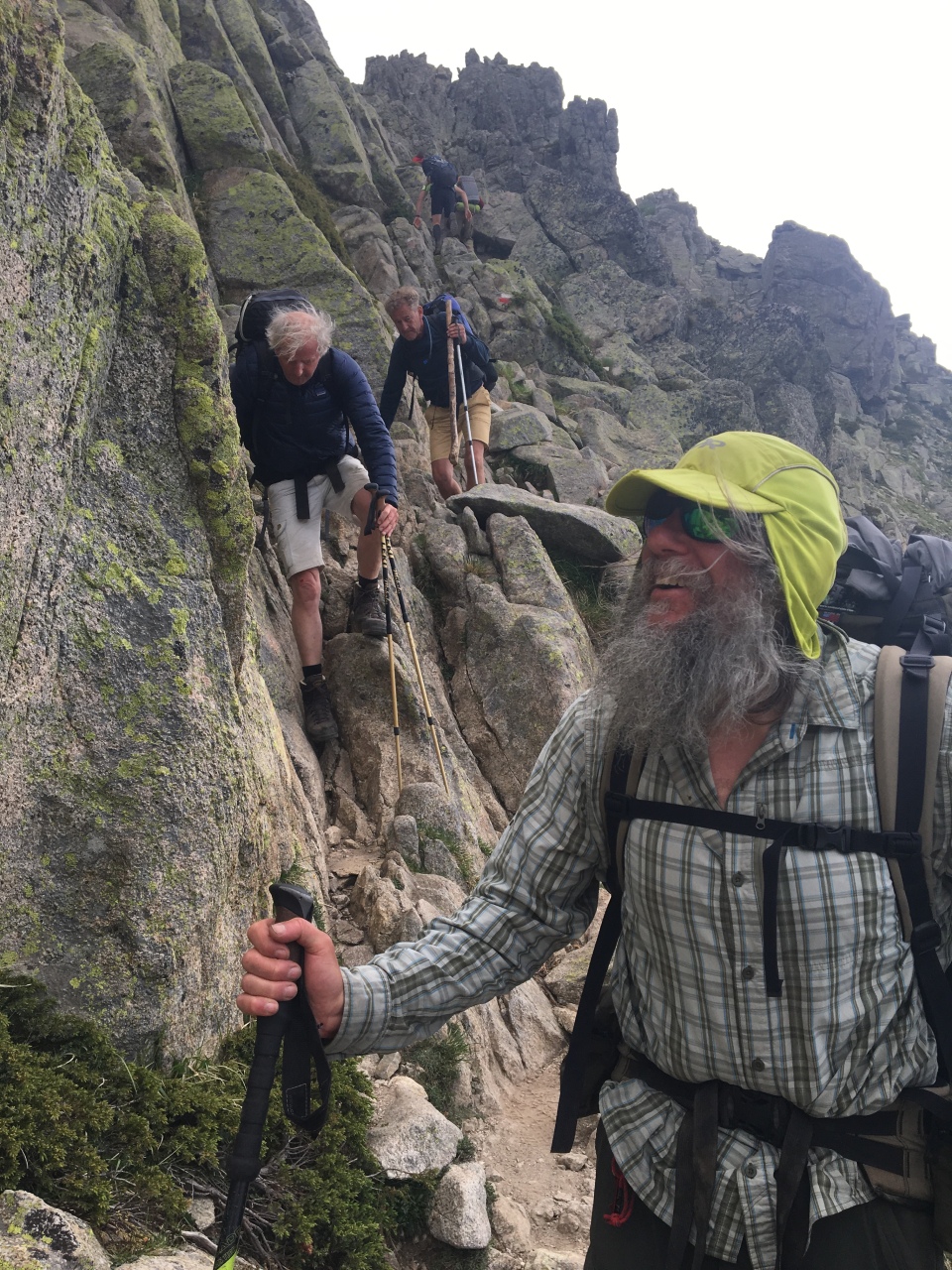 At the end of the day we had a long descend from Bocca Le Porte, long meaning 400 meters or 1,200 feet, so really it was not that long, it just fell that way as the elevation was lost on a very crumbly trail full of rocks and loose dirt, one had to be quite careful about their feet placement but otherwise it was an uneventful downhill, just like I like the downhills to be.

We reunited with Laura and Willy, and the Dutch guys led by Krist, and two Swiss ladies we’ve been leap frogging with for last few days, and several other people at Refuge Manganu where we planned the next stage. It seems like there are several options for camping, some six hours away close to a hotel, where hot showers are available for free, or we can go two more hours and gain a hill to make the following day (that’s the day when real scrambling starts) easier. We have not committed to either option quite yet.

Everyone in this refuge spoke very good English.

Best showers and toilets we experienced on the trail. Very new and clean. There are 4 showers and 4 toilets, most refuges have 2 of each, and toilets are sitting ones. No squatting required.

If you fancy some wine, you will pay €10.00 for 75cl. Little more expensive that other refuges. Pietra Ambree beer was €7.00