Time seems to be speeding less here in Europe than it does in the US. Once you leave the large cities behind, everything slows down, everybody is going about their business in much more relaxed way. The first think that you might notice is the fact that there there is practically no coffee to go. If you want your cup of caffeine in the morning, you either make it at home, and then of course you are free to pour it in a container of your choice and consume it wherever and however you like, or you can buy it from a Café in which case it is served in a ceramic cup (much tinier cup than a typical American is used to) and you are expected to sit down and enjoy every sip preferably as you are eating one of the delicious freshly baked pastries they offer as breakfast.

That’s what we did today. We had a beautiful half an hour at Kaa Pâtisserie sitting just outside of the cafe observing the few pedestrians that passed us on their way to work. It was too early for the regular tourists to flood the streets and there was a very pronounced sense of calmness surrounding us that you would not find in the bustling modern cities where patience is short and everyone hurries somewhere all the time with a cup of Starbucks in their hand and a mobile phone in the other.

The bus to Porto Vecchio departed at 8:38 a.m., eights minutes after the schedule said it would leave but nobody seemed to mind or even take a notice. The passengers were a mix of hikers and tourists and locals, with the locals holding the majority of the seats. 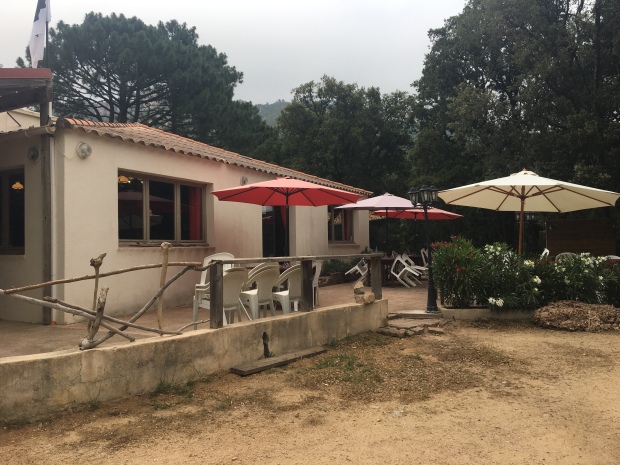 It was an enjoyable ride along the coast. In the north there certainly is a higher competition for the land. Every inch seemed to be utilized, constructed into homes, small businesses, supermarkets. Occasionally there would be a small strip of grass here and there but the developed areas nearly touched each other – town and a town, and maybe couple villages in between.

In the south, we saw more nature behind the windowsof the bus, not the wild American kind, but there were more houses with some property around, un-sculpted in most cases with wild grass reigning the region. There was a vineyard also and several beaches and campground. 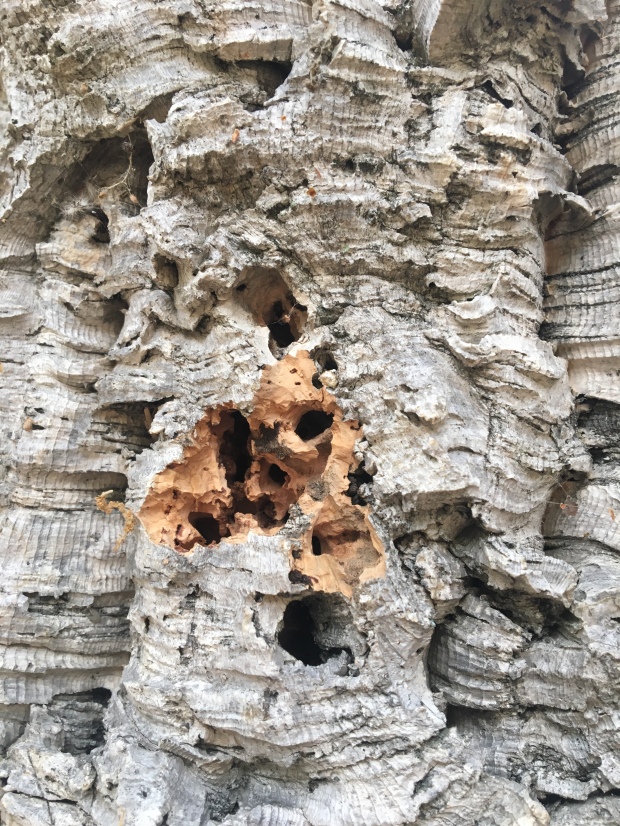 Three hours and a bit later the bus dropped us off at Santa Lucia. The town was not big, it only took us 20 minutes to run through the gas station and two grocery stores in an attempt to find fuel for our stove. We were unsuccessful and in danger of having to drink cold coffee in the morning but like the saying goes: The trail provides, and apparently it’s true for Corsica as well. 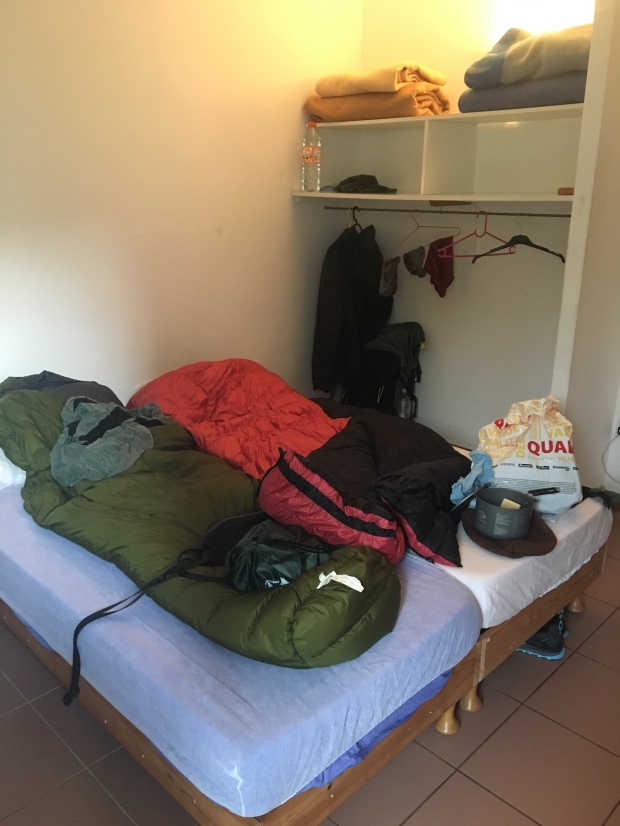 Gite La Tonnelle sent a shuttle for us shortly after the bus dropped us off. After a 10 minute ride we found ourselves at the foothills of the mountain range and those mountains suddenly looked taller and more impassable than ever. 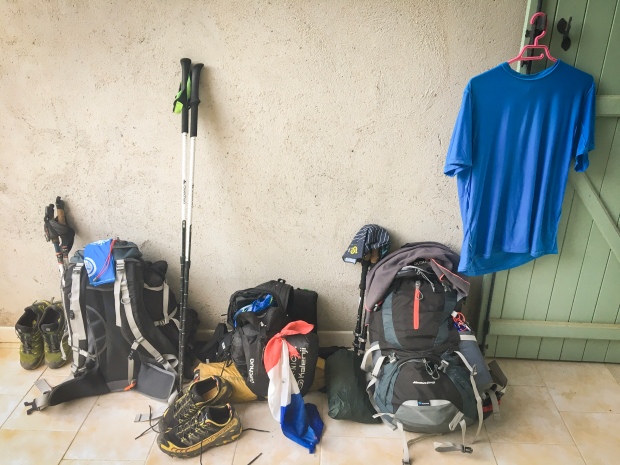 We took a short walk through the town in the afternoon . The town was not very large, a short walk is all you get if you choose not to start hiking that very same day. Once we explored the main two streets, we sat down for a beer and stroke a conversation with a 22 year firefighter from Paris who just finished the trail after 7 days of hiking, crazy fast time if you ask me, normal humans usually take 15-16 days, and he gladly gave us his half full container of fuel saying he won’t need it anymore. Hikers are simply the most wonderful people, looking out for each other, no matter where in the world you go.

At dinner back at the gîte (dinner and breakfast was €40.00 per person) we made friends with two French students also from Paris. Adele is hoping to become a judge while Hannah leans towards criminal law. 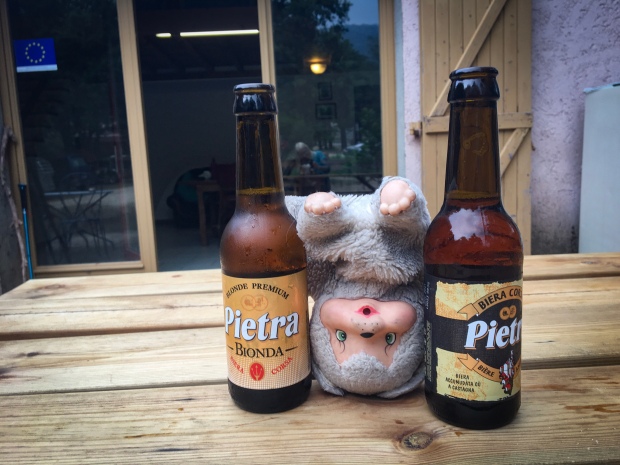 “In the future we’ll face each other,” Hannah laughed.

The dinner was a nice three course meal with a rice bowl as appetizer, chicken leg and potatoes for the entree and a yougurt for dessert for which we could not pay by credit card. We knew that the gîtes take cash only but hoped this one, so close to the civilization would have an ability to take credit cards.

Tomorrow we will get up early and try to make it to the next gîte, or perhaps even the next village if everything goes smooth. 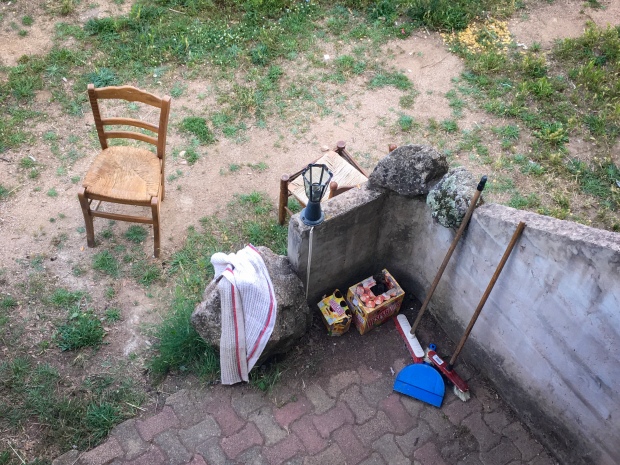 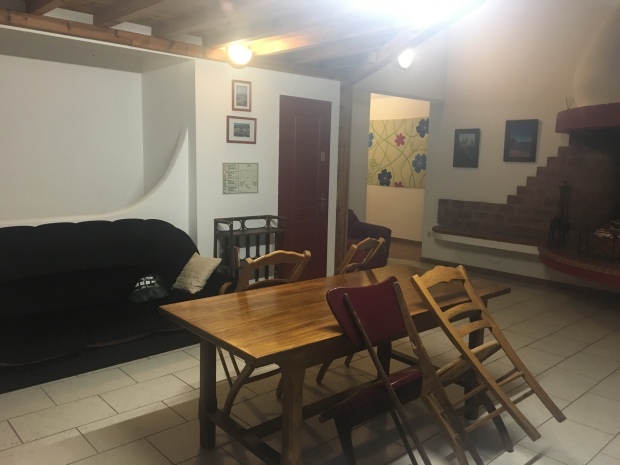 Note on Conca: there are couple places to get a drink in the town, including Gîte La Tonnelle and a bar about 5 minutes walk up the street from there, just behind the church. There are also two small markets you can buy some very basic groceries like bread and salami, water, beer, fruit, toilet paper and some canned goods.