(plus 0.6 miles to Whitewater Preserve)
Hiking today was full of magic. It was hard to get up into the crisp morning air, though not as hard as it was getting up to the snow the previous morning. Finally we managed, about 15 minutes after the alarm woke us st 5:00

The first four miles were flat and if it wasn’t for the deep sand that covered the trail in some stretches, it would have been an easy hike. The soft sand make the going slower but it was still flat and the air was good hiking temperature so really it was a pleasant walk.

Heading to the bridge

After four miles we reached The Bridge. There were two bridges really, one for train and one for cars. Thru hikers are known to sleep under the bridge or in its proximity which due to the volume of noise, especially with train passing by, did not seem like a tempting option.

I don’t think that hikers are particularly drawn by the noise but this bridge is known for quite frequent trail magic often including beer and it seems like some hikers are happy to exchange peaceful night sleep for couple cans.
We did not expect much to be left, the crowd heading here last night was rather large but we were lucky and just as we arrived, dad and a son trail angels were dropping off peanut butter jelly sandwiches and fruit.

Couple miles later we came across another trail angel, Mr. Lee, elderly veteran who was handing out water and candy.

From here the trail started gaining elevation. It was gentle and still relatively easy going. Signs alarmed us to the fact we were entering Mesa Verde Wind Farm and that wind turbines will be present. The sun broke from the clouds and started to heat the air and we watched the turbines in hope to see some breeze activity but every one of them remained perfectly still.
At the top of the first hill we came across a sign that said: “Shade and Water” We followed it and found water in a shaded area by the trail.
Just a minute of walk further we were invited into the wind farm building where we were offered coffee, more water, and Gatorade. 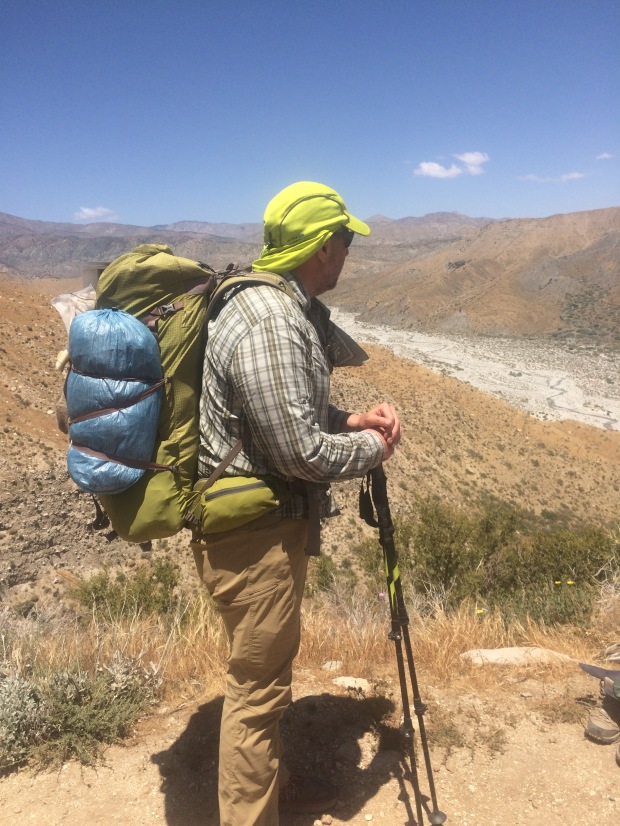 From there we had to climb few hundred feet to a small gap. The climb was steep, definitely one of the steeper grades on trail he trail, and on the other side there was even steeped down.

The pattern repeated several times with ups and down on much gentler grade as we proceeded through a canyon. Wind picked up too cooling us off and we made the next four miles in a very good time.
My initial thought was to push 7 more miles to a creek where there were supposed to be good sites. I could tell Dave was not thrilled with the idea. Yesterday took a toll on him and he wanted an easy day.
We had two options. We could continue for 1.8 miles and camped on an exposed riverbank where there were rattlesnakes warnings, or we could go 0.6 miles out of our way to Whitewater Preserve which was supposed to be like a small oasis. 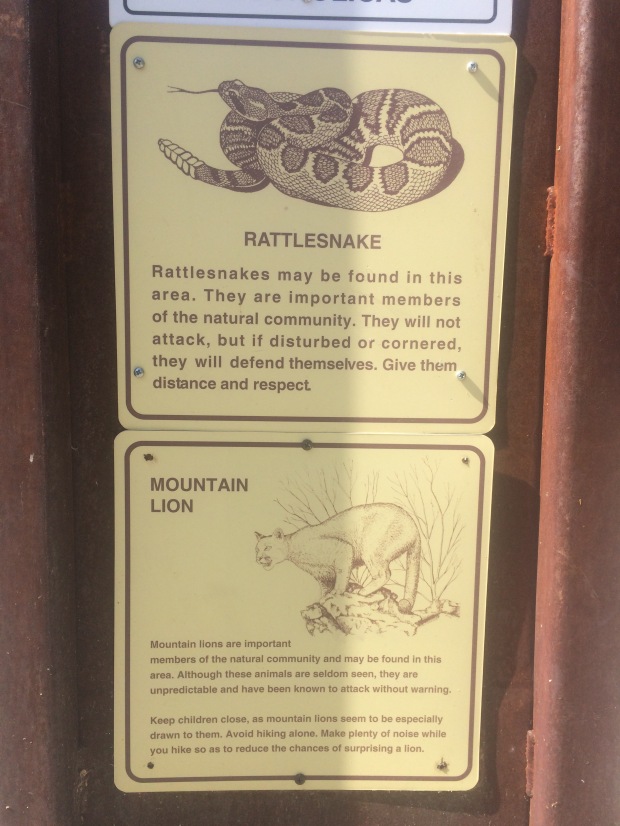 It didn’t turned out to be such relaxing place for us. Upon arrival rangers shoved us where the camping was which was ok but not great spot and he informed is that this year they had problems with theft.

The wading pool looked tempting and it would be nice to explore the area but we did not want to leave our items unattended so we hanged out by the camping area.
I also managed to walk into tree. I’m not sure what caught my interest that I did not see the giant branch but I bashed my head quite badly and for a while it was bleeding from the inch long cut. It won’t be fun when sweat runs across it tomorrow.
On a positive note staying at Whitewater Preserve meant that we met Proton, hiker from Mukilteo, WA who thru hiked the entire trail last year but could not hike this section due to a fire closure that was since lifted and so here he was on a day one of walking that stretch. We spend quite a long time talking about hiking, not only the PCT but also trail back home at PNW, and of course there was a gear talk involved as well. It turned out to be a very nice evening and hopefully tomorrow the forecast for cool temperature holds because we have some more hard climbing to do.