There is no time for a warm up. The trail starts climbing out off the Lyell Canyon right away and the grade gives our calves a workout. It does not take us long to break from the trees and enjoy views of the canyon which floor is covered with shimmering frost. It is a surprisingly nice morning. If we are lucky the sun will keep shining all the way to Donohue Pass where we are ultimately heading. 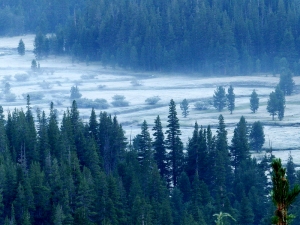 Along the way we meet the East Coasters. They too spent the night in Lyell Canyon, at a campsite couple miles prior to ours. “It was a nice site”, they say. “Until the frost came, leaving lots of our gear wet”. The sun is out and despite an occasional breeze, it is warm, and the chances are good that their equipment will eventually dry out.

The scenery changes dramatically. We leave the fertile valley below and enter an alpine zone of  sparse vegetation. Our views are no longer restricted by trees and we can fully admire the vast expanse of the basins below the pass filled with tarns and fragile grasses. We’re headed for a massive wall. From a distance it seems impenetrable but from a closer perspective we can see the path making it’s way up on a grade much gentler than we would imagine. 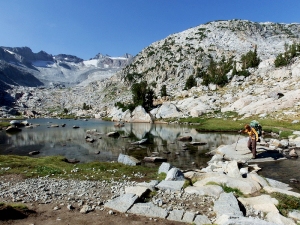 One of the frequent water crossings

Donohue Pass, which we reach after 4 hours of hiking, is everything we imagined a high altitude mountain pass would be. It is rugged and rocky and its views are stretching all the way towards the horizon. We could sit here forever soaking up the beauty but we still have miles to cover and our forever shrinks to an hour during which we finish our leftover franks, chat with fellow hikers and snap about hundred of pictures.

Dave is approaching the top of Donohue Pass 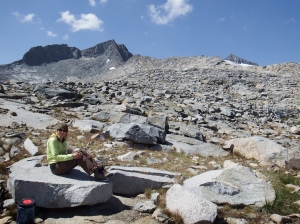 Donohue Pass marks the first milestone of our journey. We are leaving Yosemite behind and entering wilderness named after one of the most renowned nature photographer of the twentieth century Ansel Adams. At the upper reach the trail descends broken slabs of a meadow covered granite basin. We take our time here letting the views in. Large boulders sit scattered across the landscape, remnants of glaciers long gone. Water is in abundance. Numerous creeks rush downhill crossing the trail more times than we care to count, some of them we can step over, other require short rock hop. Between their melody and the warmth of the sun I feel the summer flow into me and fill me with energy I haven’t felt for days, and my legs effortlessly carry me over the miles towards Island Pass and down to Thousand Island Lake whose surface is dotted with numerous small islets. On the other shore of the lake impressive vistas of the Ritter Range please our eyes. But it is not the majestic Mr. Ritter or the amazing view of Banner Peak that Ansel Adams himself captured in some of his most famous photographs that catch our attention. More so we are concerned with the dark clouds rolling over the range. While there is still plenty of blue sky in the direction of Donohue Pass, the storm is brewing directly above Garnet Lake, area we picked for a camping spot tonight.

No lack of water during this leg of our hike

The race to beat the storm is on. And when it comes to speed hiking, there is hardly a better motivator than an approaching storm… or a couple of other hikers heading in the same direction, a potential camp spot competition. Combine them together and I hardly can believe the speed I am able to maintain here in the altitude of nearly ten thousand feet zooming up the last 400 ft before the final downhill stretch to Garnet Lake where we arrive at 4:30 p.m., once again little bit ahead of schedule. The rain comes just after the tent is set on a small peninsula with a prime view of the clouds rushing across the mountain tops. It drizzles on and off for the rest of the evening with breaks between the showers long enough for us to go and explore the un-maintained trail close by the lake’s outlet and later on make our very favorite Shepherd’s Pie for dinner but eventually with the absence of the sun the temperature drops to the all familiar jaw-chattering chill and we retire way before the last light of the day disappears.