It’s early on Saturday morning and we are on our way to North Cascades, planning to finally take Eldorado off our list. The forecast for the weekend looks promising, 20% chance of occasional showers and thunderstorms on Saturday but otherwise sunny the whole weekend.

Yet our hope to attain the summit of Eldorado is diminished before we even can set a foot on the mountain. There are no more overnight permits available for that region we are told at Marblemount Ranger Station. Instead we opt for neighboring Sahale Camp with the possibility to climb the glacier towards Sahale Peak. Understandingly we are disappointed but in reality it is not a bad exchange. Sahale camp was voted as one of the 10 best spots to camp in America by Backpacker magazine, and was always my #1 place to spend a night at. 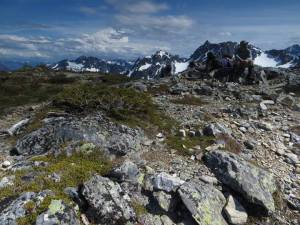 To get there we have to endure the countless switchbacks leading to Cascade Pass and a 10-minute long rain shower. The rain subsides just as we reach the pass but dark clouds rolling above our heads threaten to precipitate more. At that point we enviously look towards sunny Eldorado Peak, but soon the weather clears for us too and we do not see a drop of rain for the rest of the weekend. 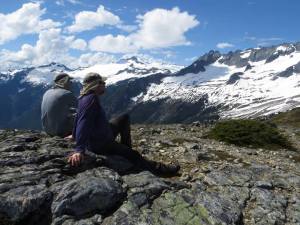 Not a bad view – lunch break along upper Sahale Arm

While the valley below Cascade Pass is still solidly snow covered, only several snow patches remain on the trail to Sahale Arm, some longer, on a steeper terrain and to be crossed with caution, others do not pose much of a problem.

The two best sites are already taken when we arrive, the one we get has good view but is more of a one person bivi site than a tent site, so we end up pitching our tent on the snow.

View from near our camp site

We do a little bit of exploring after dinner. There are couple more visible sites, both even smaller than ours, and with less views. Composting toilet is located on the far end. Clouds are coming in, obscuring the views in a very interesting way. We enjoy the evening in a company of our camping neighbor in site 1 watching the clouds, chatting about other interesting places to backpack to and his adventures with packing goats. 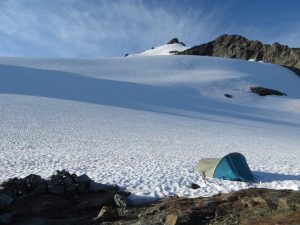 Not a bad camp

Usually I sleep pretty well outdoors but for some reason I wake up multiple times during the night, and at 1:40 a.m. voices from outside our tent get me awake one more time. It seems like people walking by searching for a campsite. They pass our tent and few minutes later I can hear them returning, their headlamps on. I expect to see another tent when we wake up in the morning but there is none and we never learn who those people were, why they arrived so late, or where they went.

On Sunday morning we venture towards Sahale Peak. We do not have aspiration to climb it, class 4 rock is not something either of us is comfortable with, so as planned we reached the base of the summit pyramid and then return to our camp. The glacier is in a decent shape, with couple of easily spotted bergschrunds, and a short section of recent avalanche debris from a slide caused by a skier on Saturday. 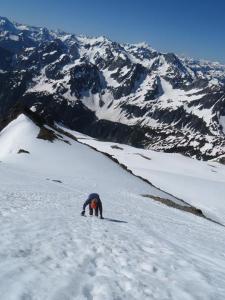 Just as usually the weekend flies by and much sooner than we like it, it is time to think about heading home. Our descent is long, and just as we were about to call it uneventful, a black bear emerges on a slope in front of us. It makes its way up a snowy field towards Cascade Pass, glancing at us once or twice, not bothered by our presence, before it disappears into treed area close to the trail.

Yay for another great weekend outdoors!