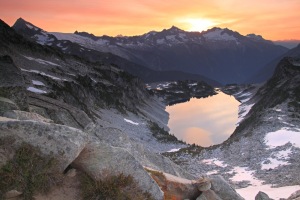 Hidden Lake viewed from the lookout

WOW would be an understatement for the sight of stars covering the sky as far as the eye could see as we stepped out of the lookout after a delicious dinner consisting of polenta and hearty stew and found comfortable seats on the boulders nearby to enjoy the show. The night was calm and moonless; the darkness long swallowed the surrounded mountains and only an occasional dim flicker of light at the bottom of the valley reminded us of the civilization some 3000 feet below. 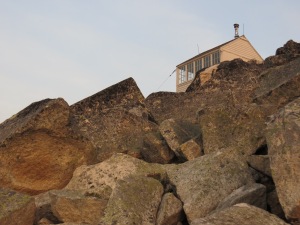 Life could not get much better considering that we had no idea what our destination will be when we left Seattle earlier that morning. All we knew was that Sahale Glacier Camp, our original choice for the weekend, was full, and so were Pelton Basin and Basin Creek as we learned upon our arrived at Marblemount Ranger Station. Our choices shrunk but  we were in North Cascades, and even the limited options called for a tough decision – camp along the ridge of Sourdough Mountain with a spectacular view of Ross Lake to feed our eyes, or head to the Hidden Lake cross country zone to spend the night in the company of some of the most amazing mountains in the area. There were 2 groups already headed that way, and though chances of spending the night in the lookout itself were slim, but we were due for the annual visit so the decision was made to camp by Hidden Lake anyway.

One of the magnificent views along the trail

It was an ideal day, warm but not too hot and practically windless with blue sky and clear view of the surrounding mountains which slopes started showing first signs of fall as the flowers faded and the blueberry foliage turned them crimson red.

Our energy level was surprisingly high, and we zoomed through the forested part of the trail, and entered into the meadow, where the trail was the steepest. We did not let the incline slow us down, and even under the load of overnight packs made a good time to the top of the hill. This was where we caught up several backpackers, taking a break after this challenging section and wishing them a good day we passed them and let the trail lead us on, traversing the slope on nearly a flat path with amazing views of Mt. Baker and other peaks everywhere around us.

Using our gravity system to filter water for the night

Soon we arrived to the final section, a faint path and a boulder field, and then there was the reward – a 360 degree view of North Cascades. The sound of guitar and a chorus of voices from the summit was an unusual welcome, and as we got even closer, a smell of freshly made chicken noodle soup added to our curiosity.

The source was a group of 6 Ukrainian teenagers who arrived at the lookout at an early morning hour with an intention to spend the night; however now after nearly whole day up there they were reconsidering their plan, and indeed after about an hour of deliberating the group announced that they have made their decision…. and that they will be heading back down.

So there we were, moving in the lookout for the night together with Dave, a navy pilot, who arrived to the top shortly ahead of us, and was happy to share the lodging. We ate dinner with a view of stunning sunset over Mt. Baker, watched the night sky with Milky Way running right over our heads, and woke up to a colorful sunrise with its red hues reflecting of the calm surface of the lake below us. One could hardly find a better place to escape for the weekend!