Getting up early paid off. Not only we escaped the heat, most of the morning was overcast, but we also got to Sunrise Camp first, and though could be really picky about choosing our site. Only one had a view of the lake, and that one won.

The terrain we covered included a downhill on a ridge, an unabridged water crossing which under given conditions was not posing a problem but should the water be little higher or faster, it could turn tricky, and a long uphill in the shade of trees.

On our way we passed Granite Creek Camp which we found neat but not overly exciting, tucked in the trees far away from any views.

The terrain opened shortly before we reached Skyscraper Pass, and there it was again the sweet smell of lupine laden meadows, and incredible views in all direction. The weather improved, and the clouds were now disappearing, leaving room for all the breathtaking scenery to shine.

We reached the camp after a stroll down to Frozen Lake, from there the trail continued in partially shaded area where 2 snow patches could be still found, none of which posed any difficulty to descent. 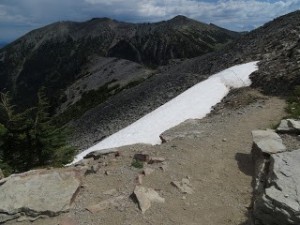 After making ourselves at home, a trip to Sunrise was in order. We haven’t been away from civilization for long, yet a craving for fresh fruit creped in. On the top of fruit we ended up having a burger and an ice cream.

Sunrise Camp was really nice but it had 2 negatives. First, potable water was not available on site, the nearest suitable water source we found was 0.4 miles away, and second, there were incidents reported lately involving the resident bear who bluffed charged several times, and was now becoming a nuisance (very unlikely this was his fault. If I had hundreds of Sunrise visitors, many of whom have no idea how to respect wildlife, chasing me for a pic every day, I’d probably get grumpy too).

The group from Florida left a bottle with fuel at their site, and upon return from Sunrise, they found out they had a visitor. There was a hole in the corner of one of their tents, the bottle cap was bitten off and so was the one from a water bottle. They were certain it was the bear who caused the damage; however in my mind the evidence did not add up. A bear, in my opinion, would use his claws to tear the tent open, and I can imagine the small bottle of fuel would get crashed in his mouth. A beautiful 10 point stag we found wandering through the camp after dusk was more likely the culprit.