Two full days on the PCT and still no snake sighting. That makes me happy.

The temperature stayed bellow 70 degrees the entire two days and our steps were accompanied by a refreshing breeze. That is unusual for this part of California at this time of the year. It makes me happy too.

Dave and I arrived to San Diego on Sunday April 23. We enjoyed the hospitality of trail angels Scout and Frodo who arranged a pick up for us at the airport, accommodation at their house including delicious meals and also the transportation to the Southern terminus the following morning.
The sky was cloudy when we arrived at the terminus, a good sign considering that after the wettest winter in history of Washington State, we were completely unaclimatized to heat.
We started in a good spirit and with a decent pace, passing mile marker 1 in no time.

The terrain was rather unchallenging, slight downhill at first and later the path winded up and down gently with stretches of flat in between.

We knew water was available at Houser Creek at mile 15 and we could spend the night there but we hoped to make it to Lake Morena at mile 20.
Everything went smooth until mile 6. That’s where my right foot started to bug me. The discomfort soon turned to a sharp stabbing pain that shot from bellow my ankle into my forefoot. It was an excruciating pain that made every step miserable and painfully slowed my progress. 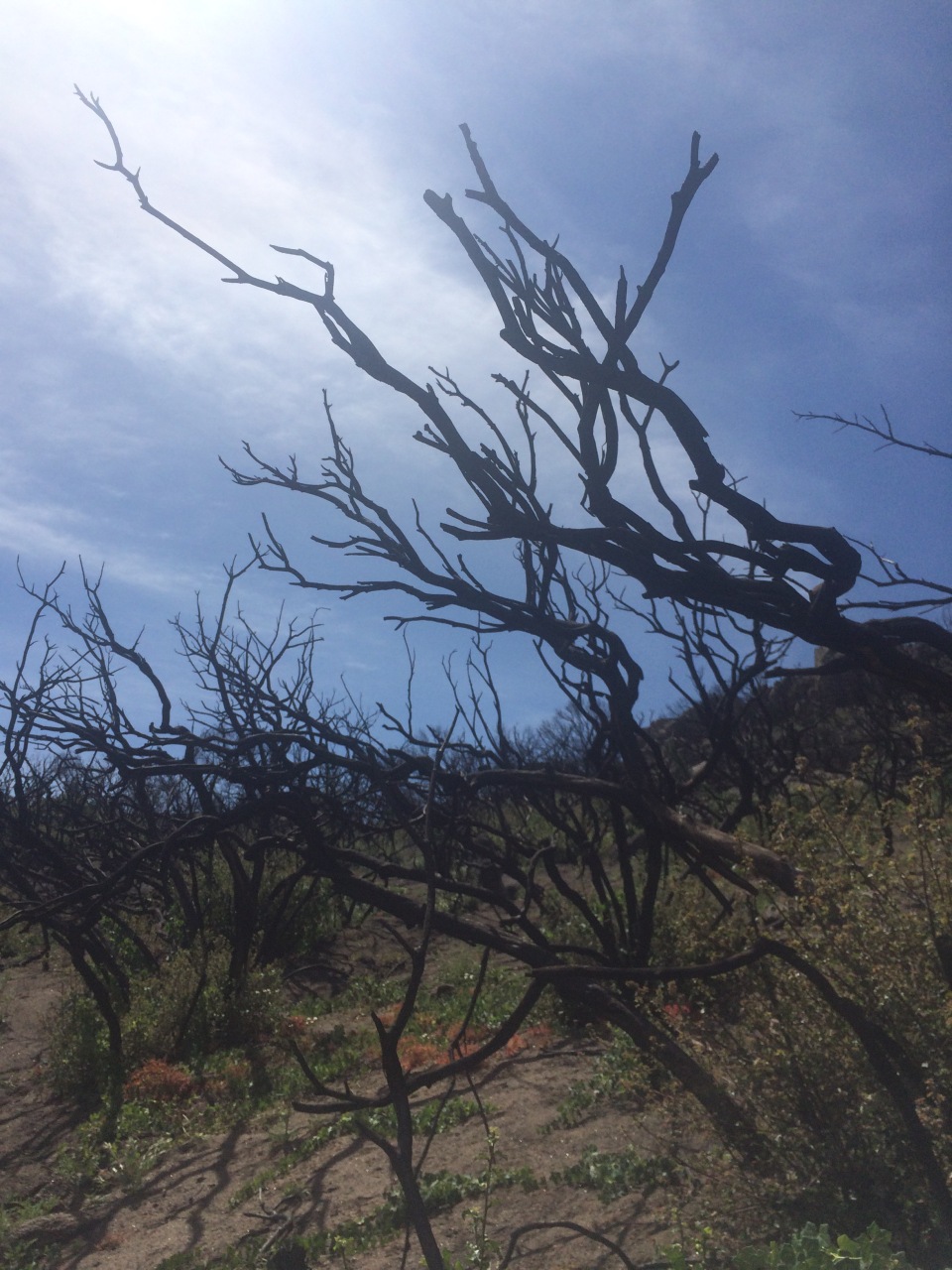 I’m not sure exactly what happened but about a month ago I started feeling the same discomfort when training on a treadmill. I gave the foot about 3 weeks rest but obviously it was not long enough and now my foot screamed in pain and my only hope was vitamin I (ibuprofen). It helped but the pain never completely disappeared. 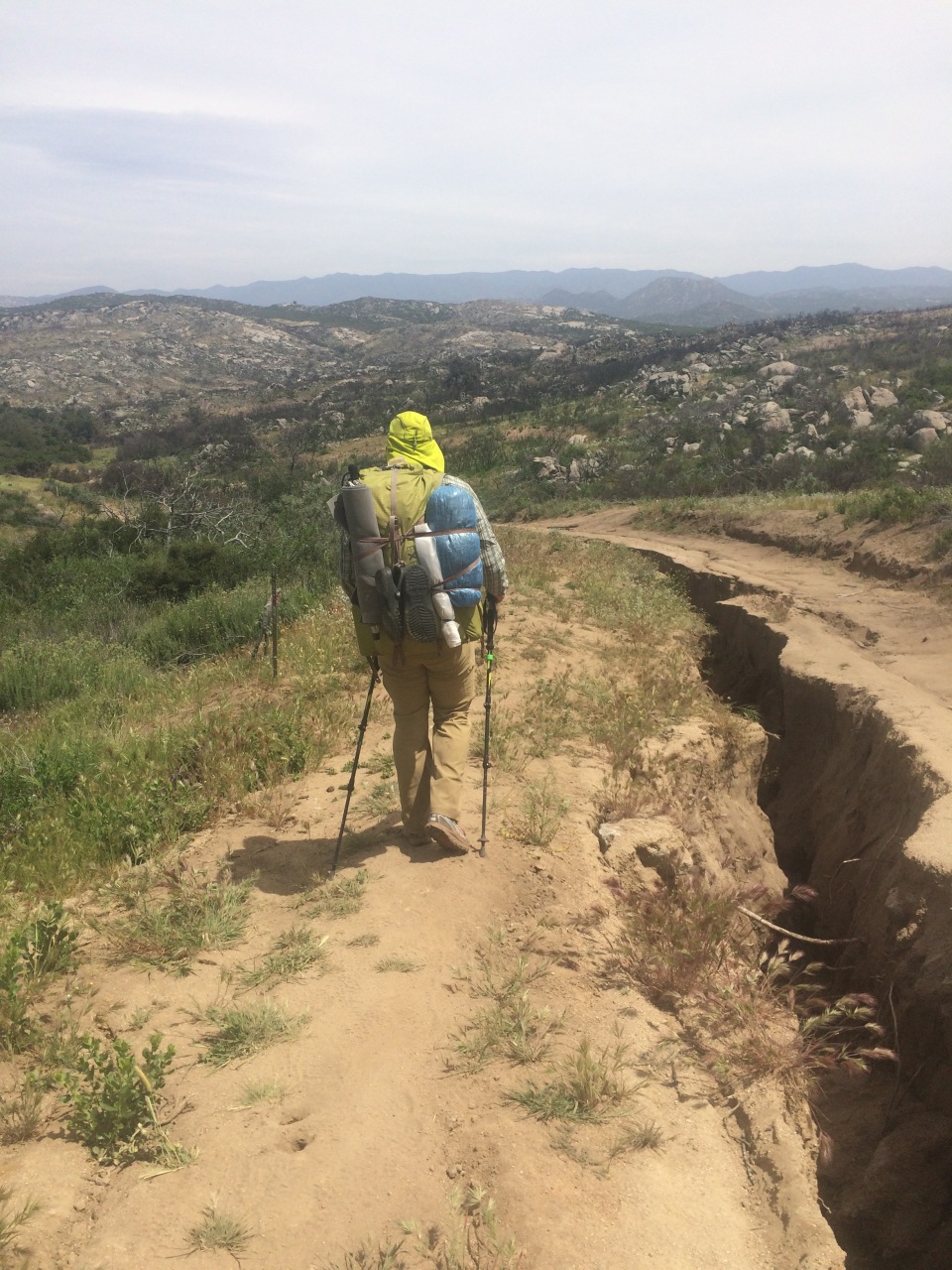 We made it to Houser Creek at 3:30 p.m. Part of me wanted to give my foot rest, but I was also worried about it getting worse overnight and not being able to walk at all, and if that happened, Lake Morena was a better place to be at. So I grabbed another ibuprofen and off we were to tackle the last 5 miles of the trail.

There is 1,800 foot climb from Houser Creek but it’s not a tough one, unless you hit it under a scorching sun. I made it slowly up, the second ibuprofen dulled the pain some, and once we stood on our the top of the hill, overlooking Lake Morena with only mile left, I knew I would hobble there somehow. 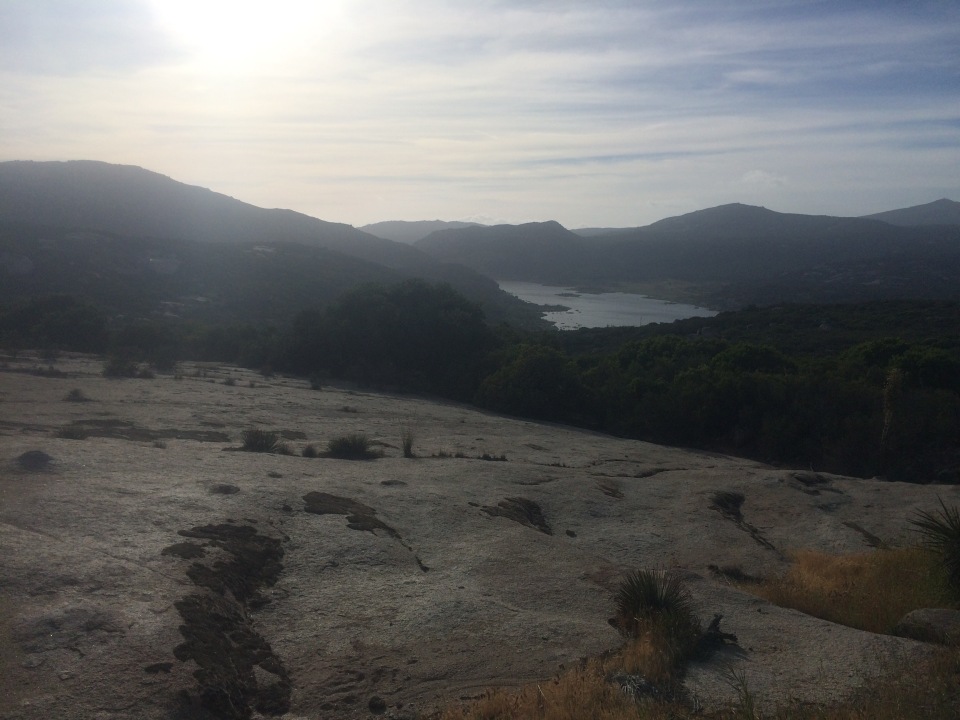 Lake Morena was the destination of choice for about 20 hikers that night. We arrived, and pitched, and just then the ranger came telling us that there was some confusion about where we were supposed to be, and asked all 20 hikers to move.

Lake Morena was where we tasted our first trail magic from Rod who brought hot dogs, pop, beer and wine for us thru-hikers.
The next morning I rose and the pain was back, and even worse than yesterday when I got some relief when I put my pack down. This morning I limped around even without the pack on.
I took two vitamins I with breakfast hoping I will be able to continue. Finishing my hike this early due to injury would be devastating.

It worked. Don’t ask me how but 20 minutes later the pain was gone and I could walk like a human again.

I assumed the pills would wear off eventually and I was happy that even four hours later that was not the case. I took couple more ibuprofens at lunch as prevention and today I enjoyed a painless day.
The scenery was amazing. Lush greens surrounded us the whole way. I would not expect vegetation this thick here, or this green.
We made several snack breaks during which we had a chance to meet and chat with some of the fellow hikers. It was very nice to meet Kevin, whose blog I’ve been following for a while, and E from Venezuela, as well as other great peeps.

Made it to mile 37.2 where we camped close to a water source, a creek that normally dries out by now but this year we are lucky. California received its fair share of precipitation during the winter and now we can benefit from it.

Fingers crossed my foot pain does not return tomorrow. We are headed to Mt. Laguna to pick up our first resupply and then hoping to make few more miles.