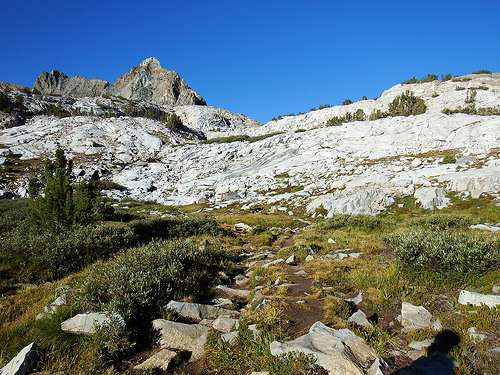 Looking back to where we camped in the cluster of trees bellow the highest peak.

Inevitably today we will descent back into the trees and while Dave is excited for the return of the forest I have a hard time finding motivation to abandon the alpine paradise. As far as views go the last couple of days spoiled me rotten and I am worried that after such feast my eyes might find the woods somewhat mundane.

Our destination is base of the Golden Staircase. Golden Staircase is said to rival both the beauty and the difficulty of the mountain passes. It is often described in term such as demanding, tiring, and ass-kicker. By positioning ourselves to its immediate neighborhood we will gain the advantage of climbing it first thing in the morning when we are fully rested and while the air is still comfortably cool.

Whitebark pines accompany the first several hundred vertical feet of our descent. I like their gnarly appearance, a reminder of the harsh conditions bestowen upon this region by the nature. In this environment they rarely grows tall enough to obscure the views. Yet another reason to love these trees.

We are on a steady downhill, passing an unnamed lake which is a home to a family of frogs and several other bodies of water, smaller tarns mostly, in which the surrounding mountains proudly reflect.  And then there is more downhill yet when the trail drops us into the Le Conte Canyon. Le Conte Canyon brings Little Pete Meadow with some beautiful campsites, rock monster – probably the most photographed rock along the trail, ranger station where we can check conditions for the upcoming few days and unfortunately for Richard and his wife who are part of Kevin’s group Le Conte Canyon brings the end of their JMT journey. Blisters Richard developed earlier during their trip are not healing properly and to avoid more serious problems they made a decision to walk out.

Our journey continues, now in the uphill direction and the incline persists until a view of rugged un-penetrable wall opens ahead of us. When the trail starts heading in its direction we know we are nearing the Golden Staircase and commence our search for a campsite. Half hour later we agree on a large flat spot by the creek and no later than five minutes afterwards the shoes fly off our feet as we jump in the water to cool off.

It feel great to chill in a shade by the creek but I catch myself turning every so often to the cliffs behind us. Dave seems to be quite fidgety too and after a while we say it aloud. Should we go and get it done with? It’s a daring thought but it grows on us. The sun is setting and the air is cooling and at 4:40 p.m. instead of setting up camp we find ourselves on an unexpected climb. 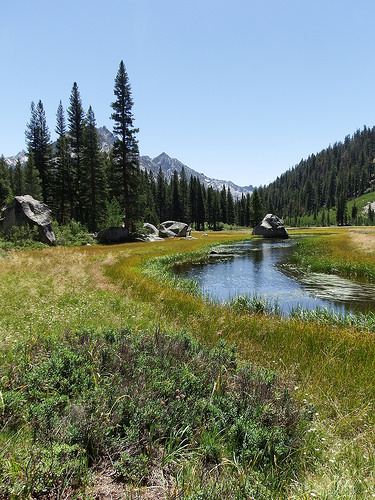 The trees are getting taller

From where we are it is close to 2000 ft of elevation we have to gain before we reach the outlet of Lower Palisade Lake and the next available campsite. The ascend is made on a series of a tight switchbacks and while the grade is somewhat steep and makes us sweat, there is no actual staircase to be found here and that makes me very happy. The views into Le Conte Canyon are outstanding from here and since we are nearing 10,000 ft again the scenery gains back its alpine feel. Sarah and Michelle are climbing the Staircase too. They maintain slightly faster pace and agree to hold a campsite for us and once again we spend the evening sitting on granite slabs, enjoying the trail camaraderie and don’t go to bed until the stars start shining above our heads.

Score! A handful of wild currants, our only source of fresh fruit along the trail. 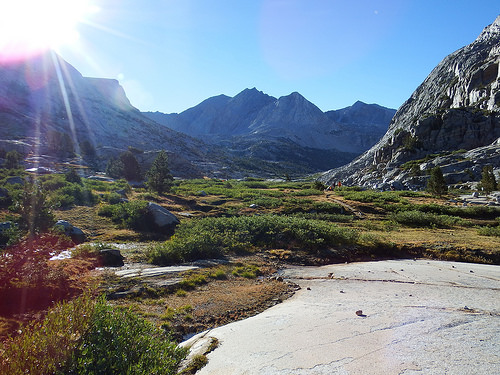